Name: Cable Cove (Cableville)
Class: A1
GPS: 44.8568096, -118.2691085
Directions: From Sumpter Oregon, head north along Cracker Creek Road to Bourne, Oregon. At 4.8 miles take a left on to Cable Cove Road and follow that until for 5 miles. Cable Cove was said to be at the headwaters of Silver Creek. On the left there looks like a mining operation still there.

Description:
Cable Cove was brought to my attention by one of our readers, Roger Hawthorne, who is a treasure trove of pictures and Oregon History!

“I am well versed with Cable Cove sometimes called Cableville

It is right at the top and many many mines in open view. Many snowmobilers go there in winter north a short distance but steep is the ridge that separates Grant Count over the top with Baker County all the back down to Sumpter. The North Fork of the John Day River forms as a small creek on the other side a few hundred feet east of The Last Chance Mine ruins. Many hikers use a FS trail a mile west that goes past Lost Lake and a few more north to the Anthony Lakes Sky area. I didn’t even know there was a Cabel City. There was a mine owner and financier named Cabel. I guess you either west sw from Anthony Lakes or ne from Granite. There are a number of folk working small claims on the southern side.

The major producer on the northern side was the Baby Mckee closed about 1907 and the Last Chance still working hard about 1914 but carrying ore down all the way to the river by the E and E mine just above Bourne. Was backtracking some so most went all the way down to Sumpter. Dang Now I aboslutely have to go back this June or so. Pretty high up there. If you take the road that turns right just after the bridge above Bourne it angles ne and goes to the claims used in the Ghost Mine TV show. Silly Show but gorgeous scenery. Just above that old mine very steep for sure is a short climb where you look east and north all the way past Baker City”

Roger’s email brought up an interesting point about the relationship between Cable Cove and Cabell City. Cabell City is only a few miles from this location, but there is no direct road connecting the two. You’d have to circle all the way back to Granite to get between the two, but it might be possible to walk the distance. 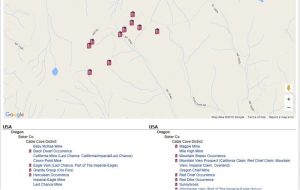 Mine locations around Cable Cove – provided by Roger Hawthorne

Cable Cove was named for Henry Cable.[zotpressInText item=”WNP8V6D6″ format=”%num%”] Henry was a pack string freighter (a train of mules used to carry goods) between Umatilla Landing and Fort Boise. He became interested in mining and was one of the first prospectors in this area. In 1888 he located the North Pole-Columbia lode. Four years later with Erwin Cable, he patented the Columbia Quartz Mine. The mine produced $3.5 million in gold and silver before it closed in 1916.

Henry also patented two other mines in the area, the Consolidated Fractional and the California. The California mine was co-claimed by Johanna and Bessie Cabell, leading to speculation that the Cabells were related to the Cables. Johanna Cabell was married to Fred Cabell, founder of nearby Cabell City.

On October 24th, 1901, the Cableville Post Office was opened. [zotpressInText item=”USXUUJFK” format=”%num%”] It served 200 residents in the area, and Thomas Costello was the first post master. Like so many towns in this part of Oregon, the post office was short lived. It was closed on May 15, 1909. This leads me to speculate that the Columbia Lode was played out by then and only the hope of hitting another vein or two kept operations going.