Directions: Taft is one of the five towns that merged together to form Lincoln City. It’s on the south end of town, just before crossing Schooner Creek. Street signs are labeled “Taft Neighborhood.”

Taft is one of several locations on the Oregon Coast that can be conclusively pointed out as a spot where the Native Americans lived. The Siletz natives in the area left huge midden heaps made mostly of oyster shells. Later settlers reported that it was “enormous,” leading historians to believe that the area was used, at a minimum, “for centuries.”

While it’s likely Western explorers came through before as they were exploring the West Coast for the Northwest Passage, the first recorded travels were by Lieutenant Theodore Talbot in 1849. The Talbot expedition came from Oregon City primarily looking for coal deposits. Talbot recorded an accurate picture of Siletz Bay, one that is still very true today. He described the beach strewn with driftwood, the swampy land, and the rough weather. 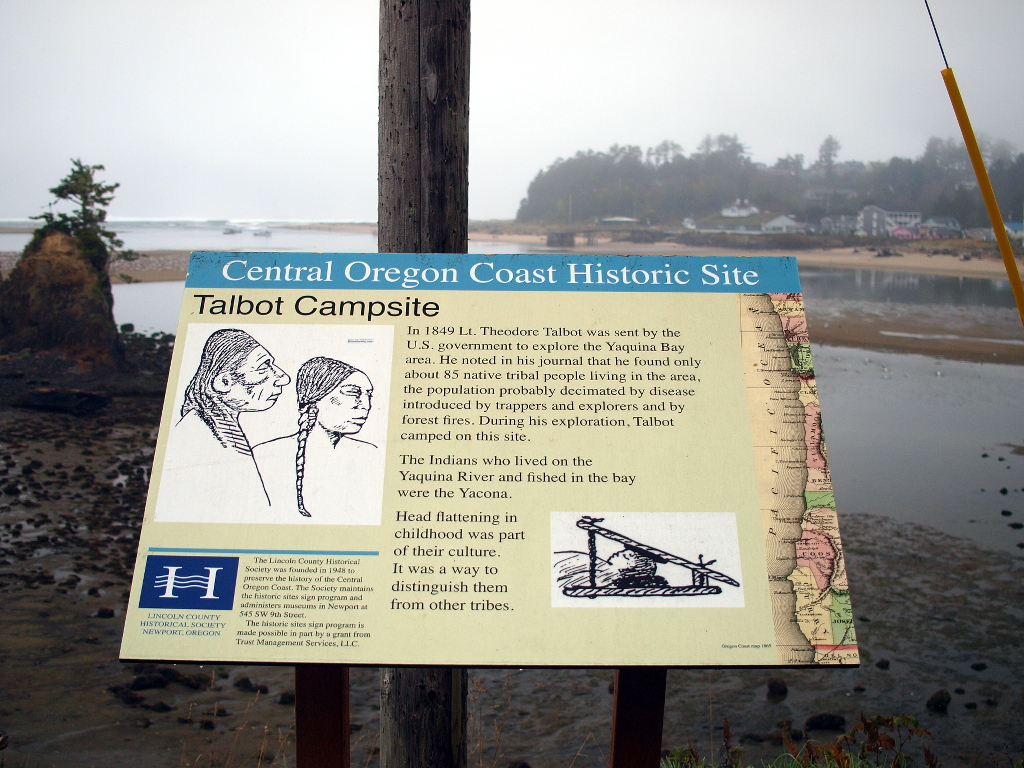 Unfortunately on November 9, 1855 President Pierce signed orders establishing the Coast Reservation after conflict between white settlers and the natives on the Southern Oregon/Northern California Coast a few weeks later. The reservation was headquartered in Siletz, and supplies were brought up by ship from Yaquina Bay, now the City of Newport. The Natives in the area didn’t live well due to forced concentrations, wrecked supply ships trying to get into the very small harbor, and ever decreasing reservation sizes.

The General Allotment Act was put into place in July 1894. Jacob Johnson Jr, and his wife Sissy Johnson, both natives were the first officially recognized land holders of what would become Taft. Johnson had a swampy area between present-day 49th and 51st streets as a pasture, and ran a ferry rowboat across Siletz Bay. They were the only residents of Taft until 1904 and reportedly were well liked by neighbors. A post office opened on March 11, 1899 in Cutler City was named Johnson in their honor.

John W. Bones rented their house in 1904 and established the first general store. He established a post office in 1906 and proposed Siletz as the name. This was rejected so he named it Taft in honor of future President William Howard Taft who was secretary of war at the time.

Land speculators bought land in the area, reselling it to mostly Finnish and Norwegian Loggers who expected to create subsistence farms. By 1920 many of these plots were sold to logging companies, but enough people moved into the area to create a strong nucleus of a town. A dairy farm was established, cheese factory, and there was enough business (and rivalry,) for two general stores. Both stores saw a succession of owners, and usage over the decades. The smaller store was moved to Otis Junction in 1966 to become part of the now gone Pixieland. The bigger building became apartments, a nursing home, and was finally a restaurant until it’s demolition in the 1980s.

The first automobile arrived in Taft in 1912 after Governor Oswald West submitted a bill declaring Oregon’s seashore to be a public highway. At that time it took 23 hours to drive from Newport to Taft. The Roosevelt Coast Military Highway was proposed in 1919, but construction did not start until 1923. Even then the road did not reach Taft until 1924.

But this marked the end of Taft. On March 14, 1926 an oceangoing freighter named the “Roamer” picked up it’s last cargo from Taft’s waterfront. The main hub of business moved to the highway to take advantage of the cheaper transportation via automobiles and the waterfront quickly died.

A mere few months later on August 4, 1926, Fred C. Robison platted the town of Taft. He had purchased the Johnson’s land in 1922 and in addition to running one of the general stores, was the town’s Postmaster. While the construction of the highway created a small building boom, landslides and washed away shorelines destroyed what was left of the business portions of the old town.

But, the highway also opened up the entire area to tourism. Modern motels sprung up to fill the needs of automobile tourists. Unfortunately competition from the other nearby towns stifled Taft quite a bit and it was never able to compete, especially when the Great Depression hit. World War II killed any lingering tourism to the area for quite a while.

Taft was officially incorporated as a town in 1949, population 498. Along with Nelscott, DeLake, and Cutler City the town lobbied for funds to dredge Siletz Bay this year. It failed after the Army Corp of Engineers declined to do so.

One of five cities that merged together on March 3rd, 1965 to form Lincoln City. The other four are Cutler City, Delake, Nelscott, and Oceanlake.