Lowell Covered Bridge is possibly among my favorite Covered Bridge in the Pacific Northwest. It is one of the many Lane County Bridges that still exist. But what makes it especially interesting is that it has been turned into an interpretive center. I don’t want to provide pictures of the inside because the displays are well done and incredibly informative. And, they cover bridges throughout the entire area. If someone had only one covered bridge to visit, this would be the one to do so.

This particular bridge is the second covered bridge at this location. Amos Hyland settled and founded the town of Lowell in 1874. He operated a ferry at this site until 1907 when it was replaced by the first covered bridge built by Nels Roney. Roney was charged with rebuilding many Oregon Covered Bridges at the time. 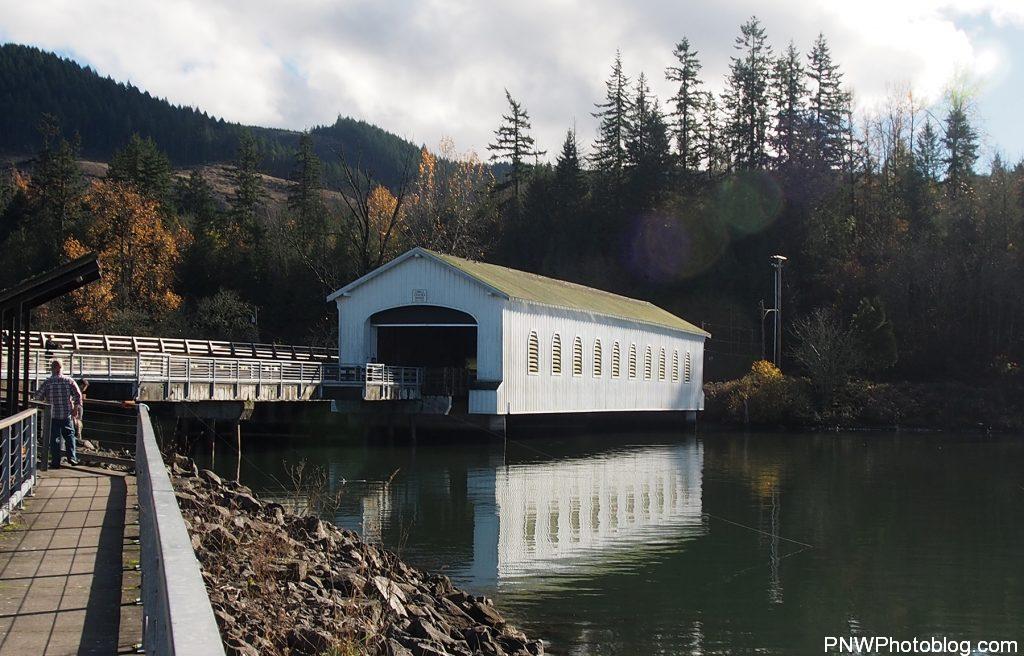 Like so many covered bridges across Oregon, it was damaged by a truck sometime in the 1940s. The damage knocked the bridge off it’s truss, so a completely new one had be built. That one was was completed in 1945. Its unique in the fact that it was built wider then any other bridges – 24 feet. But, the bridge was not “house”, I.E. roofed until two years later, leading me to believe that it was not meant to be a covered bridge at first.

Unfortunately the construction of Dexter Dam and thus Dexter Lake was going to flood out the bridge once it was built. In 1953 the bridge was raised six feet, and the decking was replaced. This gave the bridge two feet of clearance over the newly formed lake. Unfortunately that height wasn’t enough, the bridge deck and approach piling all needed repair due to rot. That work was completed in 1975.

The road over the Lowell Bridge has always been a busy route for trucks. Especially lumber trucks, which was noted in the National Register of Historic Places application for the bridge. That was granted on November 29th, 1979. 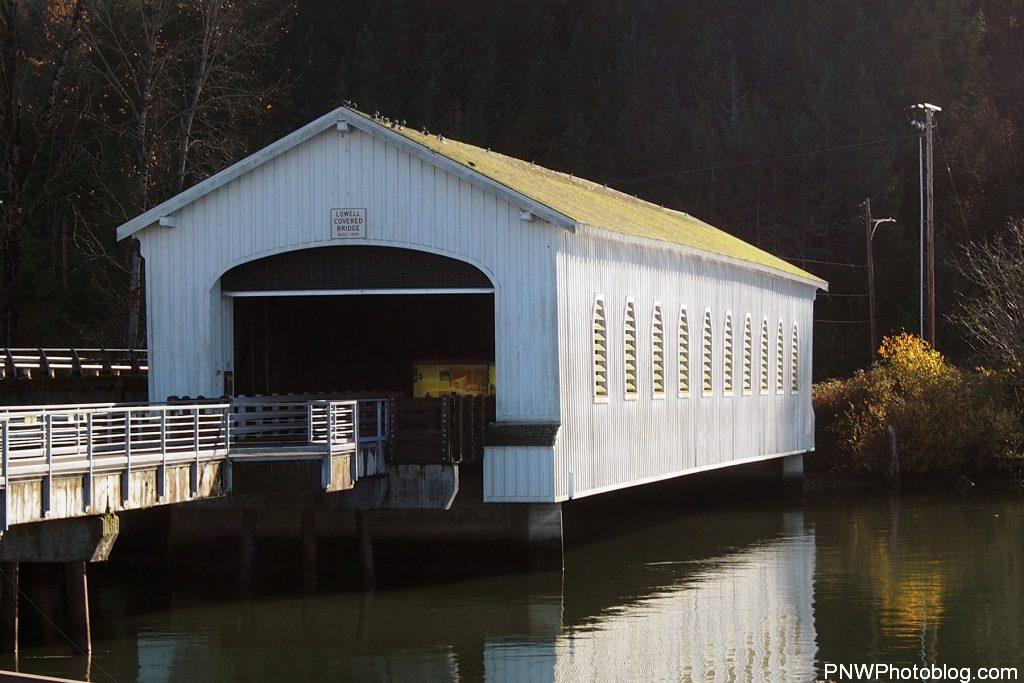 A new concrete bridge was started in early 1979 to handle increasingly heavy truck loads. Unfortunately literally weeks before it was to be completed, an dump truck tried to use the covered bridge with it’s dumper up. That damaged the portal and one of the roof braces. As the bridge was on the National Register by that time, Linn County paid to have the bridge restored.

The new bridge bypass was completed in 1981, and the Lowell Covered Bridge was pulled out of use. It was reopened for pedestrian access in 2006. Since then the the before mentioned interpretive center was opened at a cost of of $1.2 million. The funds to build it were provided by a partnership of the Western Federal Lands Highway Division, Lane County, Oregon Department of Transportation and the United States Forest Service.

That interpretive center also includes a nice sized parking lot, bathrooms, and a pretty good view of Dexter Lake and Lowell. It is also becoming a location for bird watchers, some swallows live in the bridge and there are various water fowl using the lake during migrations.