This Lost Creek Covered Bridge is in Jackson County, Oregon. There is another covered bridge also called Lost Creek in Lane County, although it’s name is technically the Parvin Covered Bridge. 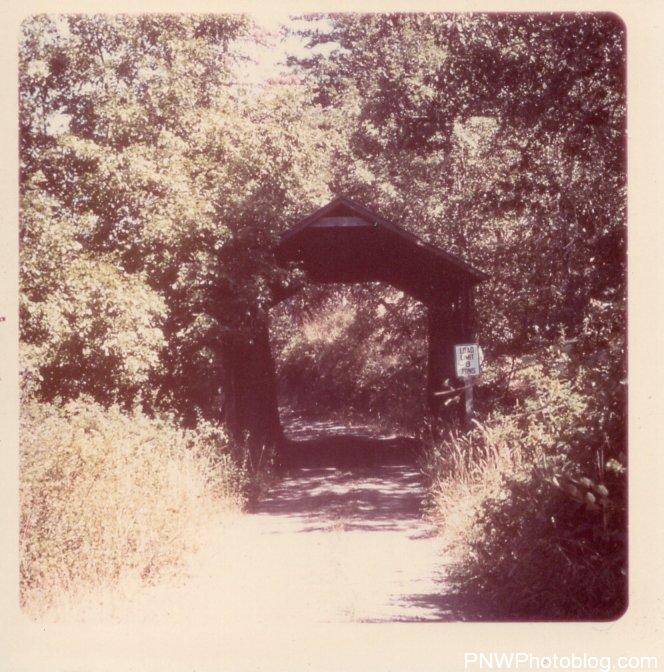 It is generally counted as the oldest covered bridge in Oregon. Interestingly, the actual build date of this bridge is in some dispute though. The official build date is listed as 1919. But local pioneer stories say it was built between 1878 to 1881. This later date is supported by a sign saying 1881, but there is no information on where that sign came from. 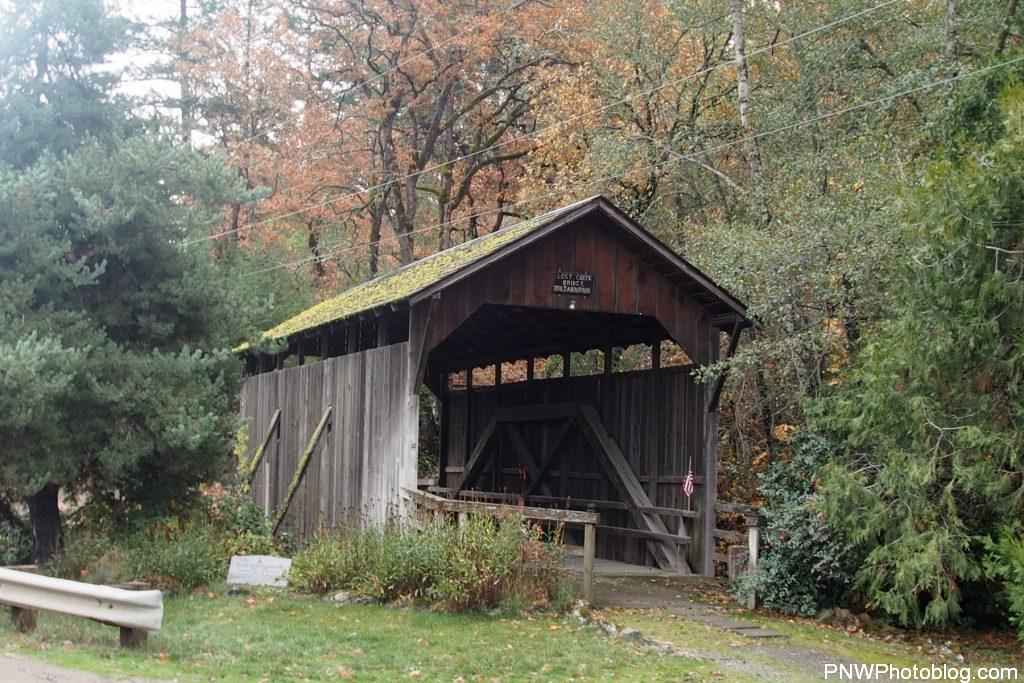 Lost Creek Covered Bridge was built by Johnny Miller who roofed another bridge in the 1880s at Lake Creek, so the 1881 build date is possible. But, in “Roofs Over Rivers” by Nick Cockrell, he says the the original build date was 1874. Ralph Friedman confirms the 1874 date in “In Search of Western Oregon“.

The Oregon Department of Transportation uses the 1919 date, but state that it may have been partially or even totally replaced then. That date isn’t a coincidence though, that was the year Conde 􏰟􏰊􏰍􏰨􏰋􏰋􏰄􏰨􏰦􏰜􏰟􏰊􏰍􏰨􏰋􏰋􏰄􏰨􏰦􏰜B. McCullough became Oregon State Bridge Engineer. Another important date that may have significance is that 1881 saw a major flood.

If I was to make an semi-educated guess, I’d say that a bridge was built here in 1874. It was washed out or massively rebuilt due to flood damage in 1881 and then likely massively rebuilt again in 1919 to repair rot.

In 1920 or so the bridge was modified to allow the extra height of log trucks using it. This was accomplished by removing the portal boards that so frequently got damaged at so many other covered bridges.

The flood of 1964 took out many Covered Bridges across Oregon. Lost Creek was almost among them, but it is said that prayer saved the bridge. The flood waters started receding in the morning,

Whatever the build date, the Lost Creek Covered Bridge was in use until 1979. At that point a concrete bridge was built directly next to it, and traffic routed over the new span. Local residents rebuilt the roof in 1985 and re-added the portal boards in 1986 to restore the pre-log truck height modification.

It appears that Walch Wayside Memorial Park was built here about the same time as those repairs. It looks to cover part of the original approach to the covered bridge, and part of a cattle ranch owned John W. Walsh and his wife Ida Marie Newtrom. The park and bridge are both maintained by their decedents and local residents.

Lost Creek Covered Bridge is also Oregon’s shortest covered bridge at a mere 39 feet. (Note that there are several privately owned modern covered bridges that actually maybe shorter.) Another interesting feature is that the deck plating is diagonal wood to provide additional strength. 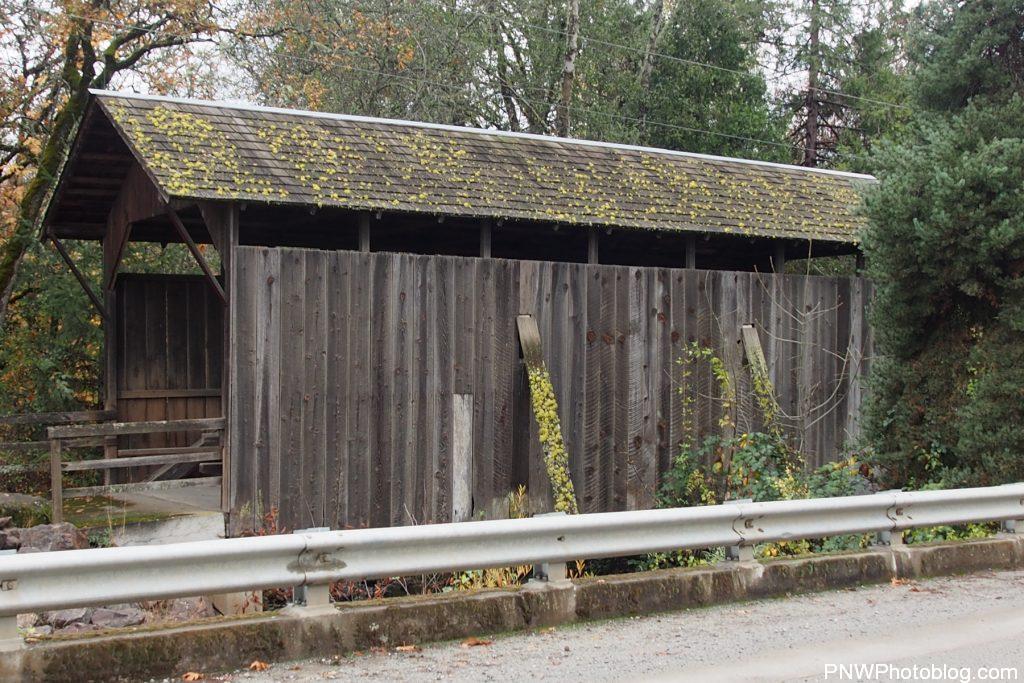 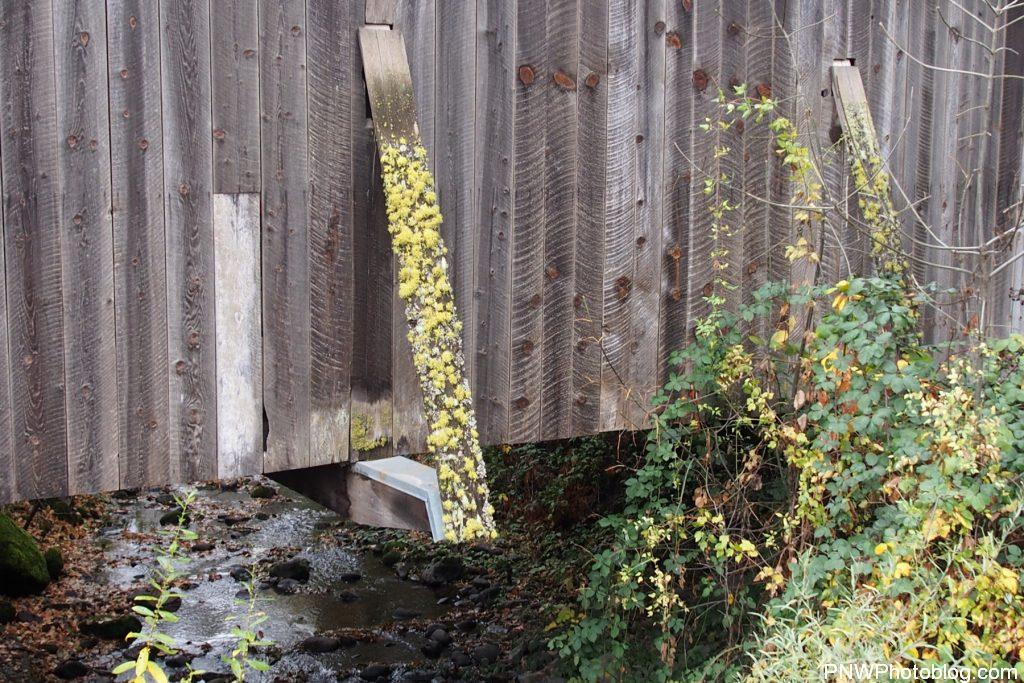 Closeup of the bridge supports 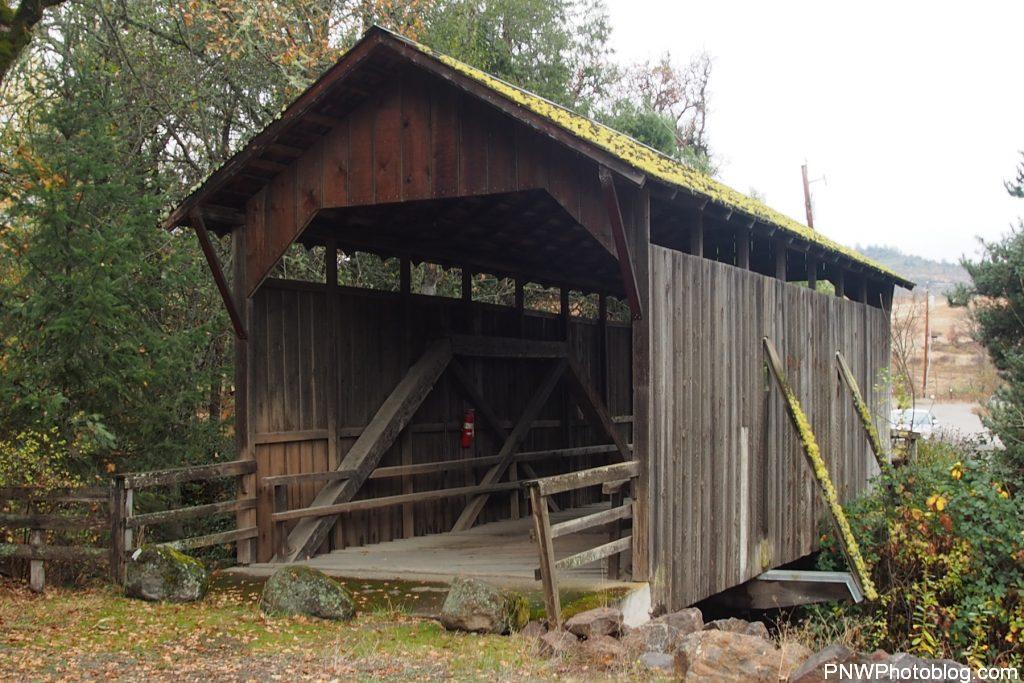 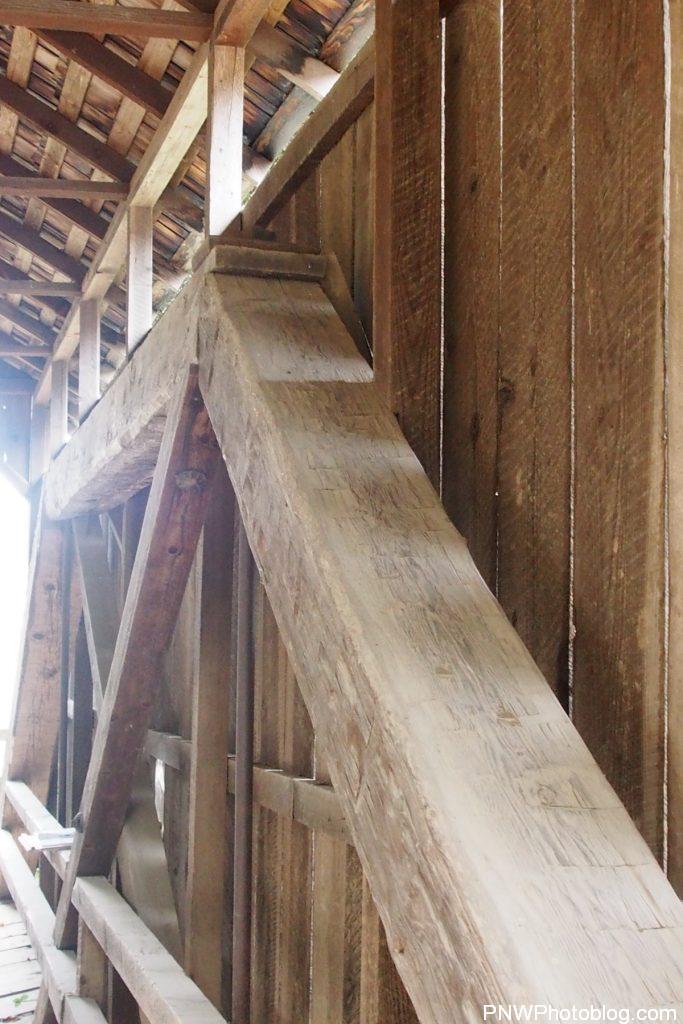 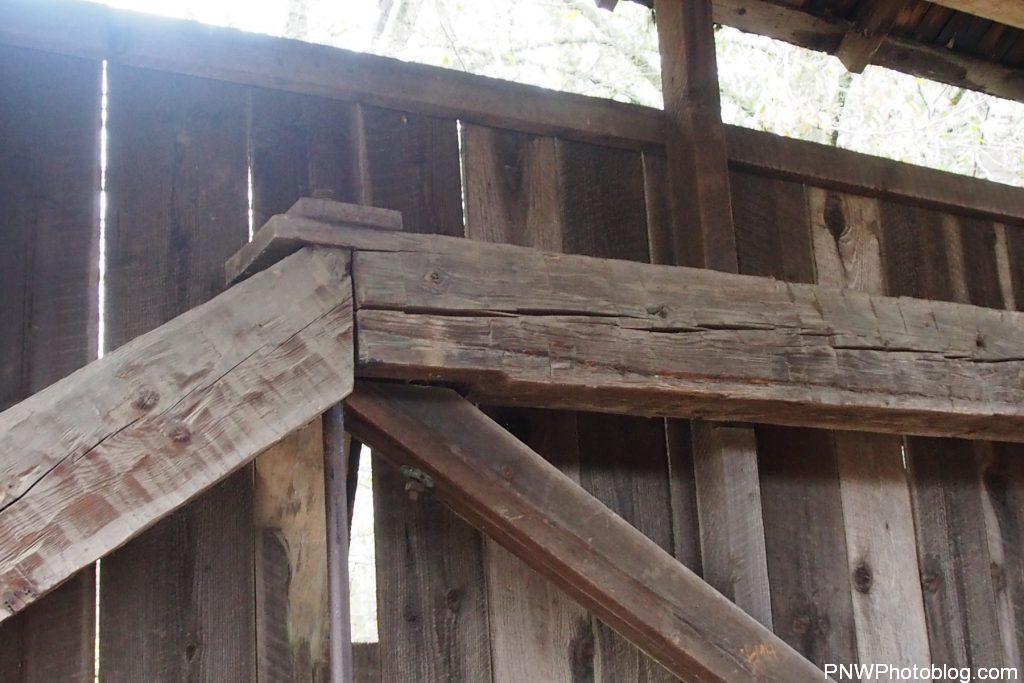 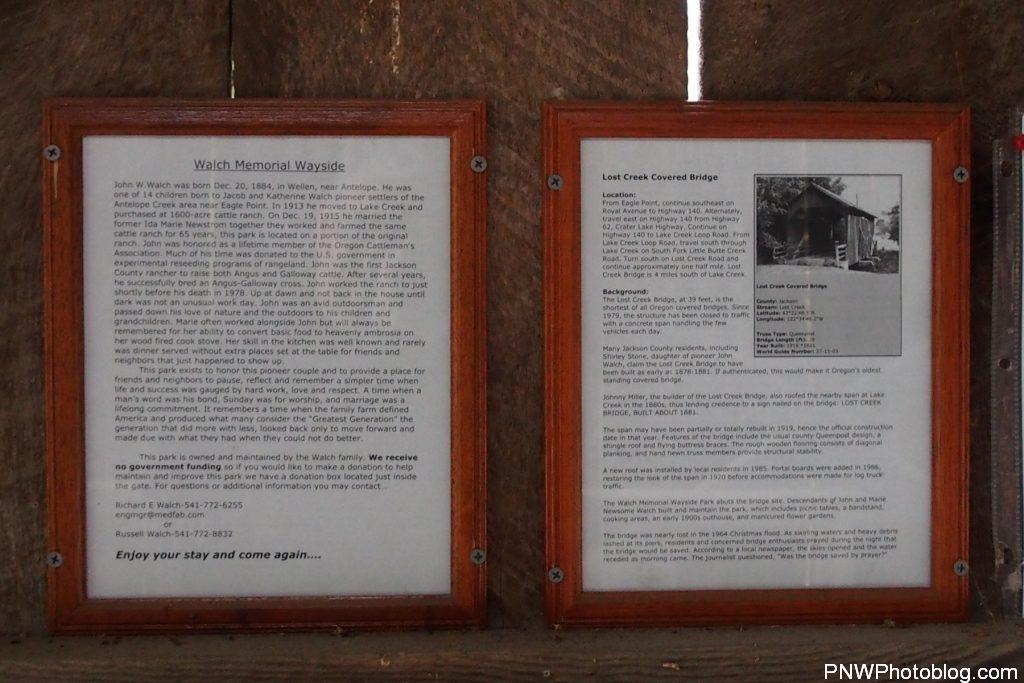 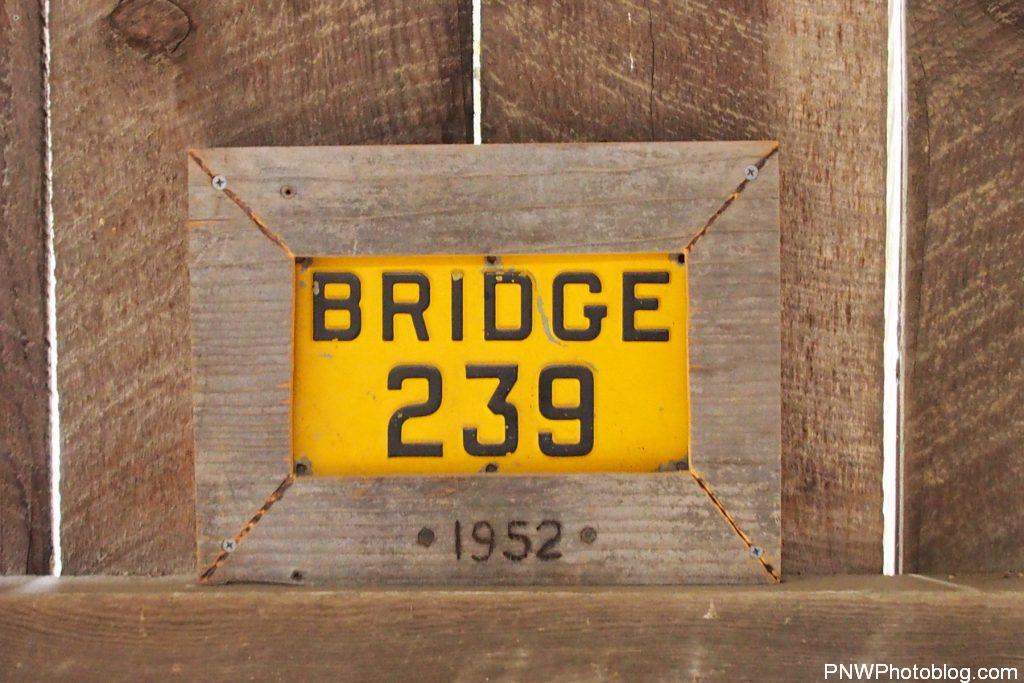