The Irish Bend Covered bridge is unique among those in Oregon in that it might have been moved several times. It is of the very common (in Oregon) Howe-truss design standardized by the Oregon Highway Department (now Department of Transportation.) It’s construction date is commonly thrown around as 1954, which is a late date for the construction of any covered bridges in Oregon. Especially for ones still built of timber. If this is a true date, it would have been among the last covered bridges built in the state.

There is strong speculation that the bridge was built to cross the Long Tom River though, and then was moved in 1954 thirty miles north to cross the Willamette Slough at Irish Bend. This would have put it about seven miles north east of Monroe, Oregon. Research into this fact is still ongoing, and this point in time the question may never be resolved.

At the Irish Bend location, the bridge served traffic until 1975. That was when two new culverts and a road realignment made it redundant. The bridge still managed to make it on to the National Register of Historic Places in 1979, even though it was not being used.

By the late 1980’s the bridge was in serious disrepair. Benton County dismantled the bridge and stored it to save it. This also trigged it’s removal from the National Register of Historic Places. The Irish Bend Advisory Committee helped to come up with a number of solutions to use the bridge. Finally Oregon State University agreed to allow the bridge to be assembled on college property over Oak Creek.

In 1989, with $30,000 from the Irish Bend Advisory Committee, another $30,000 from Benton County, and donated labor and parts from many diverse parties. An unnamed local lumber mill donated new stringers, the concrete work provided by a local engineering firm (also unnamed,) and labor to reassemble the bridge ranged from OSU Students and staff, to off-duty Benton County employees to members of the Oregon Covered Bridge Society.

Plaque inside bridge, dedicated to volunteers who put the bridge together.

In 2013, the repaired bridge, in it’s new (and hopefully last) location once again made it on to the National Register of Historic Places. The bridge is a bit hard to get too as it is on a walking path. The road there is technically not closed to cars, but it is more enjoyable if you park and join all the other walkers, joggers, and bikers using the shared path to visit it.

It is on Campus Way, and can be accessed via foot from either 35th street, or 53rd street. Best place to park is at the County Fairgrounds. 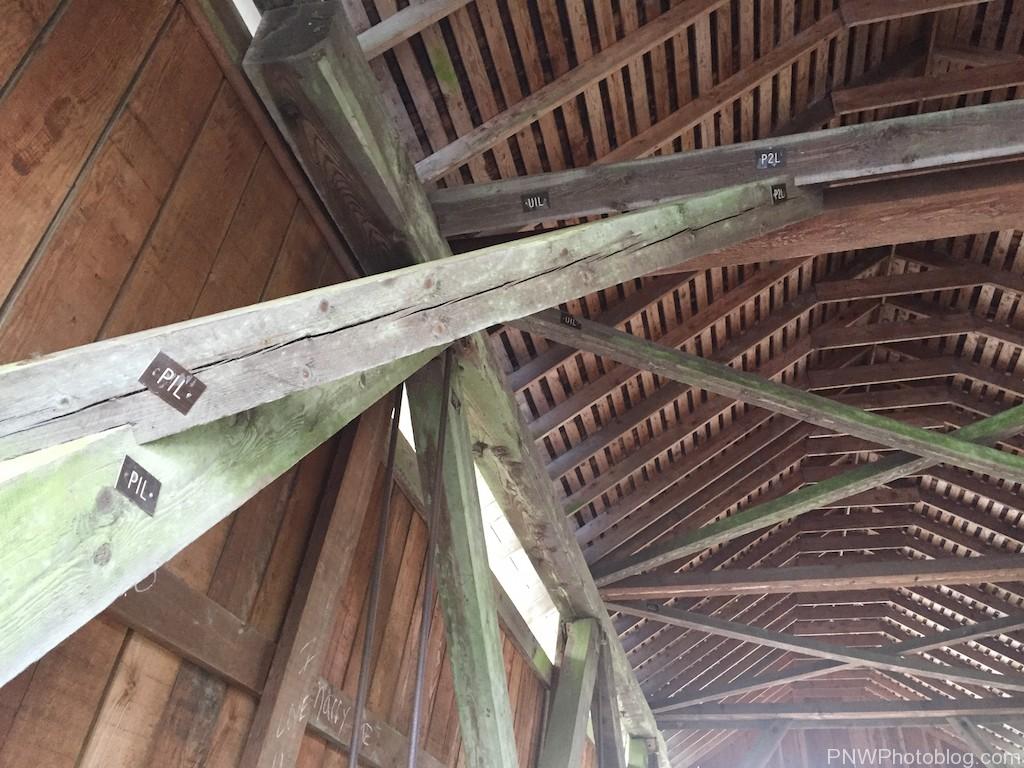