CSS Oregon 1846-1861
The CSS Oregon was a wooden side paddle wheel steamer built in New York City in 1846 for the Mobile Mail Line. She had a twin named California, and is similar in design to the Selma. She ran mail from New Orleans, Louisiana to Mobile Alabama when the Civil War started. It is reported that under Captain Abraham Perkins Boardman she made 92 entrances and clearances of ports in the Gulf of Mexico. The ship was (even at the time, illegally) seized by Governor Moore of Louisiana in 1861, but it is unknown how long she was a blockade runner before and after being seized by the Confederate State. 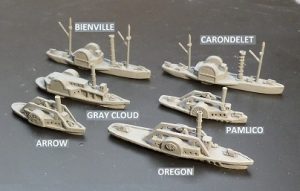 The Oregon was involved in the surrender of Pensacola Navy Yard on January 12th, 1861. She moved 350 troops to Mississippi to Florida, and the next day moved another 300 troops from Alabama. While described as “well armed state forces,” the troops were a combination of infantry, cavalry and an unit of artillery – with no cannon. Florida had succeeded two days before, and the US Navy was not able to protect the yards.

Command of the Oregon was given to Captain A. L. Myers, and the Oregon was converted into a gunboat. She was given an 8 inch gun, a 32 inch gun, and two howitzers. Along with the CSS Arrow, she sailed to Ship Island Light and attempted to lure the USS Massachusetts to her destruction via shore batteries. Her next recorded action was in the evacuation of the same island on Confederate forces in September 1861.

Along with the CSS Carondelet and the CSS Pamlico, she attempted to prevent the landing of Union troops at Pass Christian, Mississippi on April 4th, 1862. The flotilla was unsuccessful and managed to escape up the river due to their lower draft.

During the evacuation of New Orleans in April 1862, she was one of three ships (along with the CSS Bienville) sunk in the Tchefuncte River to block US Navy boats from capturing Camp Moore from the north and to keep the ship from falling into enemy hands. As a navigation hazard, this was a success. As a tactic, the US Army simple landed up river and marched upon the Camp and then the city. They were known navigational hazards until 1872 when they were raised from the river.

Back to Navy ships named for PNW Locations